The Hawthorn Group is a Northern Virginia based PR firm that has a long and ongoing history of unethical behavior. Despite being repeatedly caught lying and misrepresenting the truth to the public, and even to their own clients, Hawthorn continues to be a contractor to major trade associations.

In 2009, Hawthorn’s subcontractor, Bonner & Associates, was caught forging letters, pretending to be members of various organizations including the NAACP, and pretending to oppose climate legislation that was moving in the House of Representatives. This was all part of an aggressive lobbying effort financed by the American Coalition for Clean Coal Electricity. This debacle was such a large screw-up that it landed Hawthorn a spot in PR textbook as what not to do in a campaign. ACCCE went on to publicly disparage Hawthorn and Bonner & Associates, their president Stephen Miller saying, “We are outraged at the conduct of Bonner & Associates. Based upon the information we have, it is clear that an employee of Bonner’s firm failed to demonstrate the integrity we demand of all our contractors and subcontractors.” Despite this, ACCCE continued to contract the Hawthorn Group until 2012. 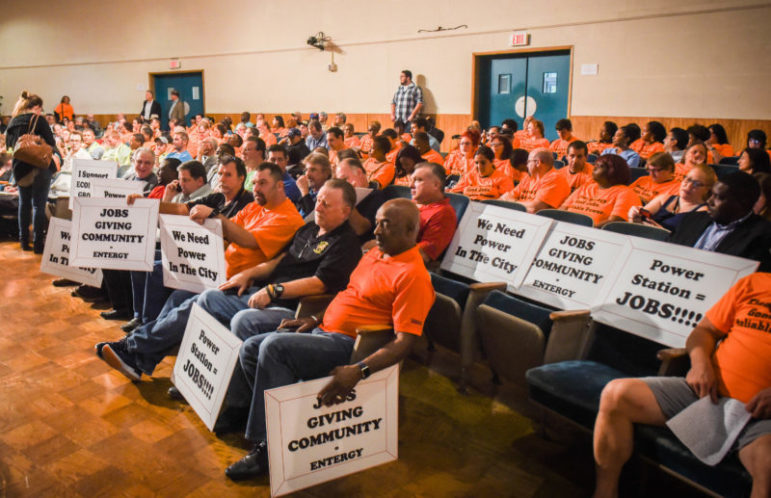 Crowds on Demand actors at a New Orleans city council hearing. Photo from The Lens.

In May 2018, Hawthorn was once again caught manufacturing fake grassroots support. Entergy, an electric utility, hired Hawthorn who in turn contracted with a company called Crowds on Demand that hired actors to attend a city council hearing in New Orleans, in order to create the illusion of local support for a proposed Entergy natural gas plant. Entergy claimed Hawthorn acted without their permission in this move to hire actors. The hired actors showed up at the hearing and represented themselves as local, concerned citizens that supported the proposed plant, some holding signs that said “Power Station = JOBS!!!!” and “Jobs Giving Community = Entergy.” The Entergy plant was approved by the city council in a 6-1 a decision that Entergy argues should stand, even after the paid actors scandal was revealed.

Hawthorn Group’s largest single contract in our dataset is a $3 million contract they received in 2016 from the Edison Electric Institute. The American Coalition for Clean Coal Electricity had an annual contract with Hawthorn between 2008 and 2012, maxing out at nearly $3 million in 2010 and totaling $9.9 million over that period. It’s unclear why ACCCE terminated Hawthorn’s contract work, but it could be attributed to a sharp financial downturn for ACCCE starting in 2013.  ACCCE’s reported revenue dropped drastically from $43 million in 2012 to $21 million in 2013.

The Edison Electric Institute also terminated their contract with the PR firm. Hawthorn does not appear on EEI’s 2017 990 form.

Read more about Hawthorn at Sourcewatch

Read more about Hawthorn at DeSmog