Now this is getting interesting…

PRWatch just revealed that DCI Group was subpoenaed by the US Virgin Islands as part of the ExxonMobil fraud investigation.

This Climate Investigations post contains some things we know about Exxon and DCI Group and its work on climate change.

First, we know there was a contract.  DCI Group was retained by ExxonMobil for many years for probably a range of services.

So what might turn up from the Virgin Islands subpoena?  Answer, lots.

In an expose published several years ago over at PolluterWatch, we dug into Andrea Saul, then Senator McCain’s press secretary who used to work for DCI Group on the climate counter attack account.  Lots of details on DCI Group are to be found in that blog.

Meanwhile, below are a few examples of climate denial episodes starring DCI Group…

Send us more if you have them. Any documents too! 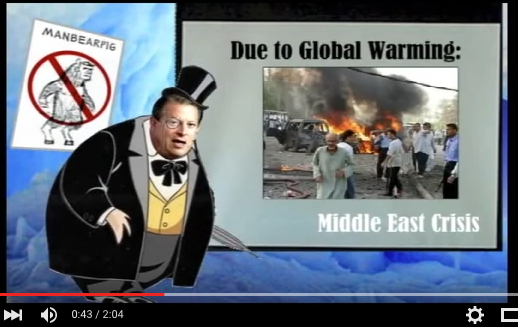 In May of 2006, a YouTube video emerged, made to look like a spontaneous “viral” video, poking fun at Al Gore and his film “An Inconvenient Truth”.

The video was revealed to be the work of DCI Group by the Wall Street Journal, who sleuthed out that the video was produced on a computer at DCI Group and set up to look like it was made by a dude in his basement.

ABC News even covered the caper on Good Morning America

Wikipedia has a well sorted page on the Penguin Army caper with all the deets.

Was this done for Exxon?  Maybe someday we will know.

Coincidentally, we have an ExxonMobil Foundation grant in the records for 2003, the year TCS was launched.  The grant is to the Tech Central Science Foundation for $95,000 for “Climate Change Support”.  It will be very interesting to see the proposal, the contract and the report back on deliverables for this grant.

Here is an ExxonSecrets map of some of the people associated with TCS: 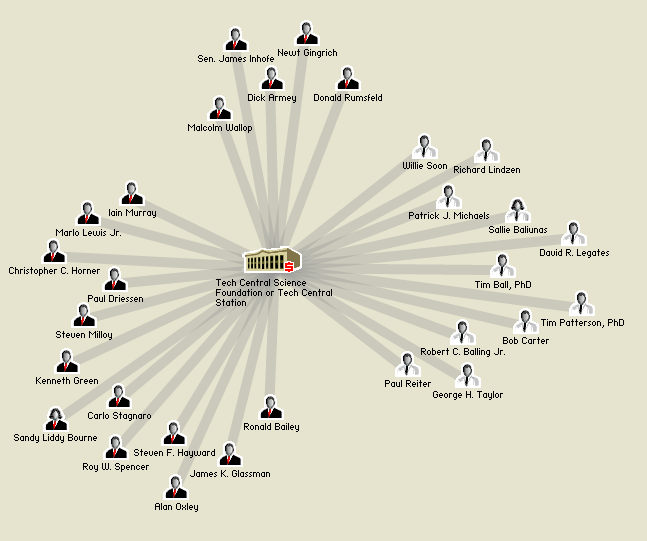 And here is a snapshot of the TCS firehose of counterattacks on climate policy and climate science.

See this article by Soon, Baliunas, Legates and Taylor October 2005, for example.  Much more of this is available.

In June 2006, less than a year after Hurricane Katrina, Tech Central Station produced and distributed a Video News Release (VNR) that called into question the science linking hurricanes with climate change.  Was this work on the ExxonMobil contract?  Again, maybe now we will find out.
The VNR itself, along with a known newscast that used the piece, preserved by the Center for Investigative Reporting:
Dr. William Gray, the hurricane scientist and climate change denier in the video, passed away just last weekend at the age of 86.
VNRs are pre-produced news segments, contracted generally by corporations, edited and sent out to news stations in small markets in hopes of filling airtime within the actual newscast. And they often do.  This one was aired on at least one station.
Materials sent to TV stations with the video listed “TCS Daily Science Roundtable” as the producer.
The press release for the VNR video said:

“Some scientists say it’s part of a naturally occurring cycle, while others have made the claim global warming is to blame. Two of the foremost weather and ocean scientists believe that this is all part of the cycle of nature.

The voiceover in the video included a similar message:

“There’s a lot of debate as to what’s been causing all of these hurricanes. Some scientists say it’s part of a naturally occurring cycle, while others have made the claim global warming is to blame.
“Dr. William Gray and Dr. James O’Brien, two of the nation’s top weather and oceans scientists, point to scientific data for the answer […].
“Gray and many of his colleagues believe it’s not global warming that’s creating these massive hurricanes, but the cycle of nature itself.”

More clues on DCI’s role as a coordinator for Exxon anti-regulatory campaigns, come from a useful document that was leaked to me by mail at Greenpeace.  The three page document is the invitation on Heartland Institute letterhead includes the agenda and invitation list for a June 2006 meeting convened at the DCI Group Washington DC offices.

The meeting is titled “Strategic Discussion Regarding the Clean Air Act”…in other words, how to slow, stop or derail the implementation of the Clean Air Act’s health and environmental protection provisions.

The invitation was sent by Joe Bast and Sandy Liddy Bourne, the President and VP of the Heartland Institute.

The stated agenda is:

“to discuss public policy challenges related to the Clean Air Act.  We are gathering approximately 50 experts from the free-market think tanks and industry to assist us in developing an action plan to address legislative concerns likely to arise this fall and next spring”

The Invitation List includes a who’s who of climate deniers and many organizations who were being funded by Exxon at the time and in years prior to 2006. 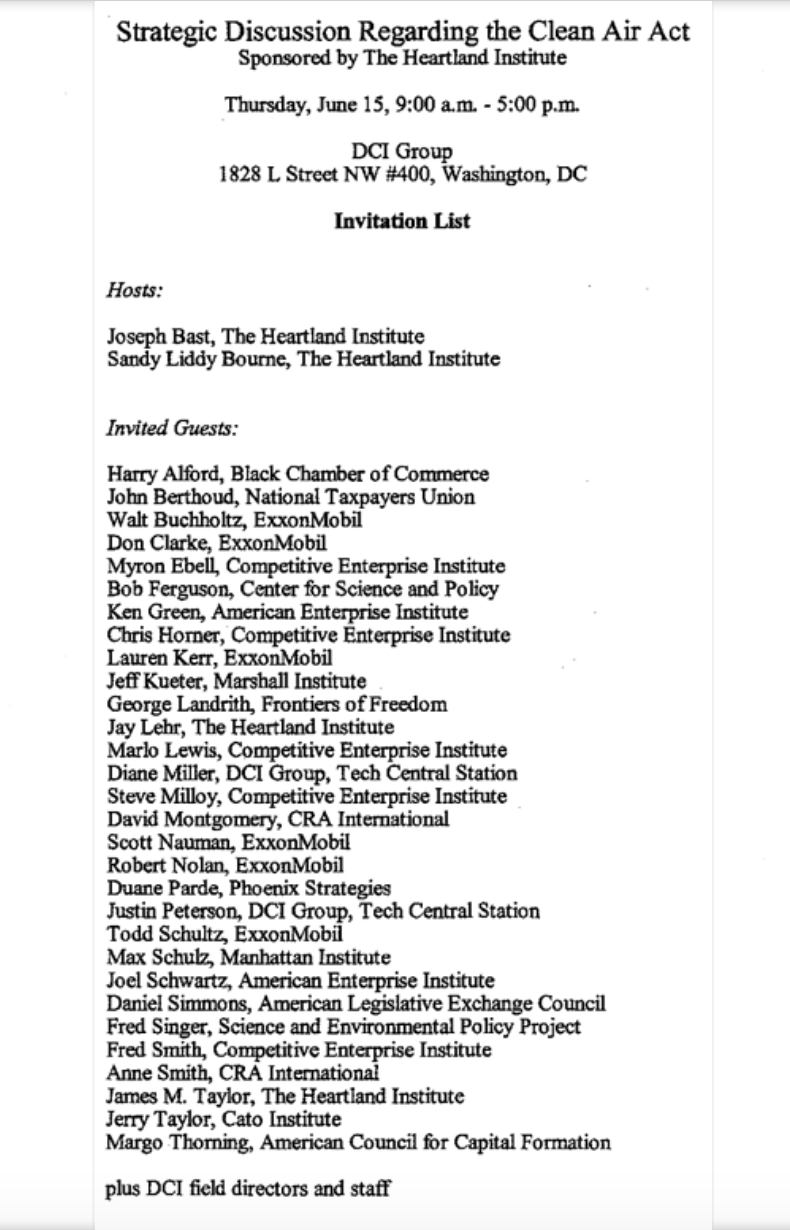 Exxon staff Four sessions on the agenda were to be presented by ExxonMobil staff:

DCI Staff
Competitive Enterprise Institute staff (CEI had been dropped by ExxonMobil by this point after receiving over $2 Million in funding from 1997-2005):