This week, the Competitive Enterprise Institute ran a full page ad in the New York Times complaining that the undersigned groups were being attacked in the course of several state investigations into Exxon’s campaign of climate denial.  Not wanting to give the CEI broadcast any oxygen, but what really caught our eye is the list of signatories and their collective history of funding by Exxon.

Last time I looked it costs at least $100K to run a full page ad in the New York Times. What an analog tactic in this modern age…run an ad as a show of strength and pretend that people saw it.

The gist of the ad, with an image of the gagged Statue of Liberty, is a martyred plea about the abuse of power by state Attorneys General investigating ExxonMobil (#ExxonKnew) and how such subpoenas and requests for transparency are infringements of First Amendment protections.  We wrote here the other day on how the First Amendment plea by Exxon’s lawyers and minions mimics that of Big Tobacco decades ago.

(Note: happy to guide any reporter who asks through these documents)

In total, the signers of this ad have received $10.1 Million dollars from Exxon, ExxonMobil and the ExxonMobil Foundation from 1997 through 2014.  They were key nodes in Exxon’s climate denial machine.  CEI was the largest active recipient to receive climate tagged funding from the company starting with a 1997 grant for $95,000 earmarked by Exxon for CEI’s “Global Climate Change Program”.  And I didn’t even tally all of Steve Milloy’s various grants from Exxon through the years.

These figures come from analysis of the ExxonSecrets database.  Looking more closely at the original documents, we found that these grants included over $2.2 Million in climate-specific funding from Exxon – grants earmarked for climate change work.

Further, the signatory list includes some clear VIPs of climate denial. In fact, several of the signatories were part of the infamous 1998 Global Climate Climate Science Communications Team, who crafted a multimillion dollar plan to challenge the “conventional wisdom” of climate science and replace it with “uncertainty”.  This team was organized by American Petroleum Institute and included representatives from Exxon, Chevron and Southern Company.

CEI’s ad signatories Myron Ebell, Steve Milloy and David Rothbard were all on that 1998 team who developed the campaign.

In addition, the 1998 memo goes into great detail about the potential funders of such an effort and the so called “Potential fund allocators” who would receive the money implement the plan.  CEI itself was listed as a ‘fund allocator” along with three groups who signed the CEI ad: ALEC, CFACT and Frontiers of Freedom.  (The Marshall Institute, alas, is no more…transformed into the CO2 Coalition)

So there you have it, we assume Exxon (and others) went ahead with the 1998 API plan, even thought it was leaked and front page news in the New York Times.

These groups don’t want people asking questions about their corporate funders, and don’t want to be questioned about what exactly they did with Exxon’s money.

Exxon doesn’t want to answer questions about what they expected in return for these large grants.  (CEI already subpoenaed and clearly expects to be on the short list of future investigations.)  They want to change the subject to a discussion of free speech…

The list on this ad should serve as a pretty good field guide for lawyers seeking information on Exxon’s campaign of climate science misinformation.

For those seeking still more info about these people and organizations, I made this handy ExxonSecrets map.  Click on the map to go to ExxonSecrets where you can click on any person or org to get more detail.  Have at! 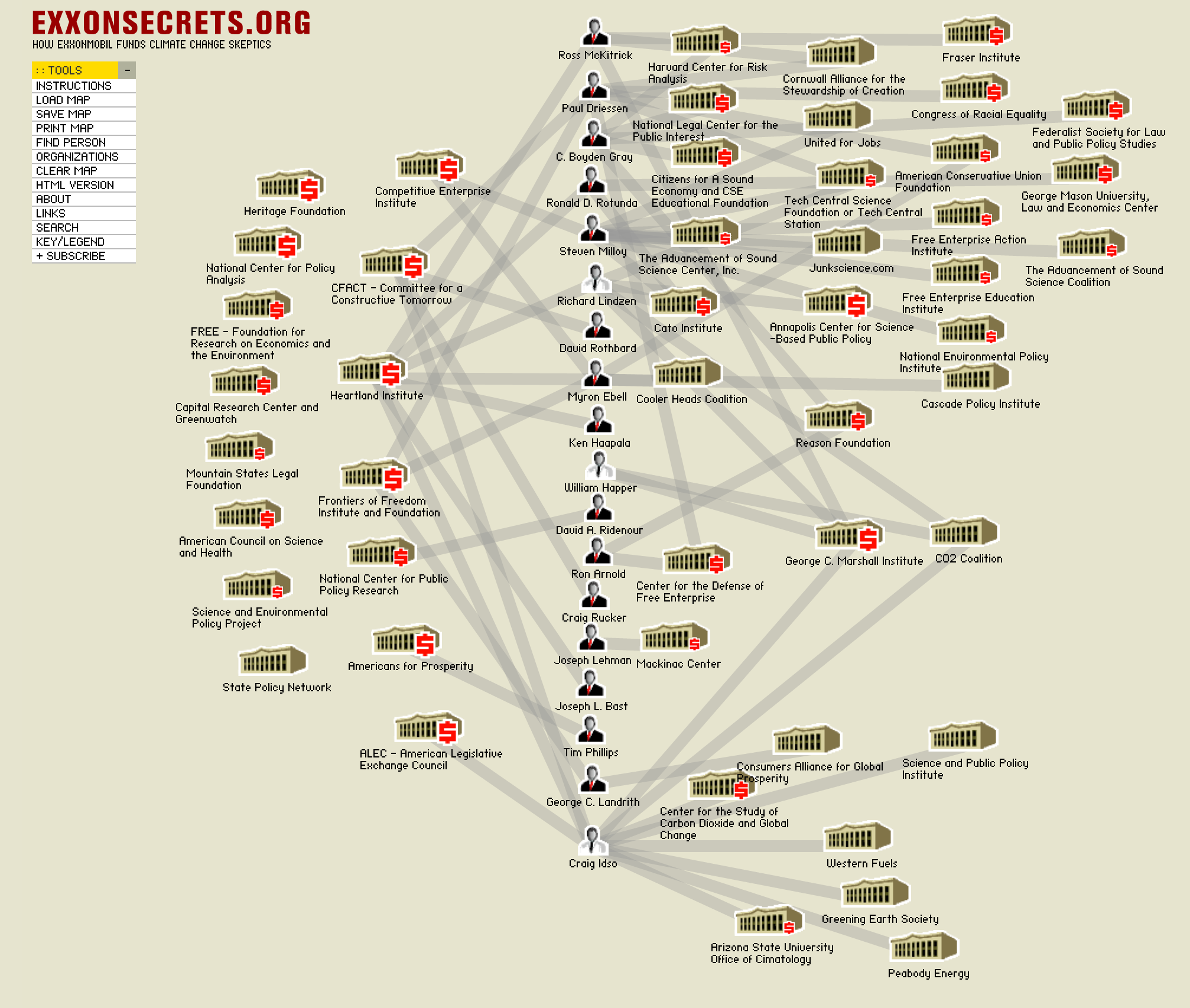