If you are a reporter covering ExxonMobil and the unfolding #ExxonKnew investigations underway in several states, the story can get very complex.  Exxon is claiming it did nothing wrong.  Exxon’s paid accomplices are martyring themselves and screaming about the First Amendment.

We thought we would take it back to basics – the source documents. We created an online file cabinet of the key documents that have been revealed by investigative journalists over the past nine months and those in our Exxon archives from 25 years of watching the climate denial machine at work.  We will add documents as they arrive on our desks.

These documents all live at ClimateFiles.com, an archive built on the Document Cloud platform familiar to journalists, created with a grant by the Knight Foundation.

There are three basic phases to this story.

What Exxon knew and when they knew it – The crux of what was revealed in the fall and winter of 2015 by the Inside Climate News investigation and the Columbia University/ Los Angeles Times collaboration is extensive new evidence that Exxon and the rest of the oil industry had a more thorough understanding of climate science in the 1970s and 1980s than had previously been realized.  And that they also understood the policy and economic implications of the climate threat. Further revelations by DeSmog in April 2016 confirmed Exxon’s unequivocal knowledge in the late 1970s that “there is no doubt that increases in fossil fuel usage” were problematic for climate, and that these facts were known across Exxon’s global operations. This serves as a new backdrop for what happened next.

What Exxon did to block rising concern about climate change – This phase starts in the late 1980s, heats up in the mid 1990s and extends into the late 2000s, changing shape and tone with increased governmental attention to the climate threat. Here there are key documents showing Exxon’s (and Mobil’s and later ExxonMobil’s) ringleader role in driving the corporate campaign against advancing national and international policies to avert dangerous climate change.

What Exxon would like hide from investigators now – Exxon executed a turn about a decade ago with clever PR tactics, declaring that they had always known about climate change but had been “misunderstood”.  This is detailed extensively in Steve Coll’s increasingly important book Private Empire (see chapter 15 “On my honor”).  Between 2006 and 2008, the company began to mark its words on climate change more carefully and abruptly stopped funding multiple non-profit organizations and front groups it had been coordinating to apply pressure in the public policy arena by attacking climate science, climate scientists and elected officials who took up the charge.  This campaign ramped up after the 1997 Kyoto Protocol and escalated during the first 5 years of the Bush Administration.

This leaked plan was launched the year after the Kyoto Protocol was signed. It was developed by representatives from the API, Exxon, Southern Company, Chevron and a team of people free market organizations along with communications professionals.  The plan includes a multimillion dollar, multi-year budget to install “uncertainty” in the public policy arena.  Target audiences are detailed including media, policy makers and science teachers and the plan includes an objectives list titled “Victory will be achieved…” itemizing the measurable goals of the plan. Multiple groups Exxon would subsequently fund are named in the plan. 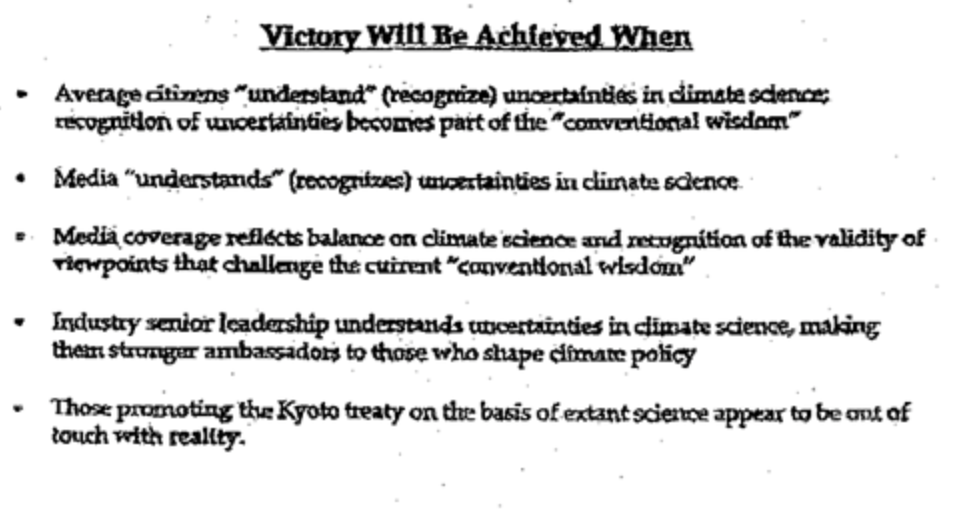 A 1980 report, “Review of Environmental Protection Activities for 1978-1979,” produced by Imperial Oil, Exxon’s Canadian subsidiary, again suggests that Exxon knew that CO2 was a harmful pollutant in the atmosphere in the 1970s. The distribution list for the Imperial Oil report indicates that it was disseminated to managers across Exxon’s international corporate offices, including in Europe.  Document found by DeSmogBlog in spring of 2016.

February 3, 1981 letter from Gilbert Gervasi, scientist at Esso Eastern to G.A. Northington, Exxon Research and Engineering regarding CO2 calculations for the Natuna Gas Project finding “the total release of CO2 from producing Natuna gas and burning of LNG manufactured from the gas would be almost twice that emitted by burning the equivalent amount of coal.”

There are multiple other key documents on Natuna in the ClimateFiles archive.  The majority of these were illuminated by the Inside Climate News team.

This document contains a “final draft” of a to-be-published document by the Global Climate Coalition responding to the IPCC Second Assessment.  It has been edited by Lenny Bernstein a Mobil Oil scientist (page 2).  The document contains a back section with extensive rebuttals of major counter-arguments used by climate deniers. This part was never published.

Exxon Corporation’s Spring 1996 Publication, “Global warming: who’s right? Facts about a debate that’s turned up more questions than answers,” includes a statement by then Exxon CEO Lee Raymond trumping up uncertainty in the science behind global warming as well as the cost of a carbon-restricted market. The publication cites to Exxon funded climate change deniers.

This pamphlet, circulated to both U.S. and international policy-makers questions whether climate change is man-made and if so, the extent of contribution of fossil fuels to the problem. Although statements in this pamphlet are partially true in that Exxon “carefully studied” the science behind climate change, it contradicts its own internal early climate change research and findings and instead emphasizes unknowns in the “honest debate.”

In April 2000, Exxon published a collection of Op Eds it had submitted across the country in order to influence public understanding of the risks of climate change and proposed solutions. The series here includes articles entitled “Do No Harm,” “Unsettled Science,” “The Promise of Technology,” and “The Path Forward on Climate Change.” Each of these propaganda pieces highlights uncertainty regarding impacts and paints Exxon as a key to the solution for global climate change rather than the problem. Readers can review highlighted excerpts and the rhetoric used in 2000 with Exxon political activity at the time.

This fax and memorandum dated February 6, 2001 from Exxon lobbyist Randy Randol to John Howard at the White House Center for Environmental Quality makes recommendations for changing the U.S. team working on the Intergovernmental Panel on Climate Change Third Assessment and Synthesis Report and delaying IPCC proceedings.

Another 2002 memo from Randy Randol to the Bush Whitehouse outlined what would eventually become the Bush ClimateScience.gov program

This meeting invitation and agenda illustrate the ongoing ringleader role ExxonMobil played in organizing asymmetrical attacks on the Clean Air Act and other environmental protections laws.  The meeting was hosted by Heartland Institute which received a $115,000 grant from ExxonMobil that year.  The meeting was held at the offices of DCI Group, a public relations firm contracted by ExxonMobil.