This week the Heartland Institute will be gathering their small island of misfit toys in Washington, DC for another of their tedious climate Denial-Palooza events.  We have followed these events going back to 2008.

Heartland declares War on the climate

The climate deniers of course feel vindicated by the Trump election. These fringe extremists have a lot in common with the extreme agenda of the Trump camp, where many have embedded themselves. There are speakers at the Heartland meeting who were on the Trump EPA transition team, who will be talking about the plan to dismantle the government’s climate science and policy capacity.  The Heartland Institute is equally gushing with pride, with boss Joe Bast declaring war in February, writing about the climate change policy fight, “It is a war, the most important and most consequential war of our era.”  Fighting words indeed.

The question is…Who is paying for this?

Heartland has been losing a lot of revenue in recent years. DeSmogBlog has everything that can be found about Heartland Institute’s funding.

Heartland had a sugar daddy rich donor named Barre Seid revealed after a 2012 sting operation exposed Heartland’s finances (New York Times and The Guardian covered this). Heartland recently left its glitzy upscale Chicago HQ, where it moved in 2012 from its self proclaimed “shabby” former offices. They now reside in a former dentist office in suburban Chicago (justifying that they were now closer to the airport).

Heartland Institute and friends are heavy recipients of Koch foundation funding and Donors Trust ‘dark money’ funding, but an important new donor has emerged in the past decade…

The Mercer Family and Heartland Institute

In recent months, the Mercers have been revealed as among the biggest backers of Trump’s campaign and machine. Rebekah Mercer is now a Trump Whitehouse advisor according to news accounts.

The NewYorker’s Jane Mayer published a new piece last week, The Reclusive Hedge Fund Tycoon Behind the Trump Presidency, on the Mercers and their influence over the current state of affairs

And the Washington Post’s Matea Gold threw down a big piece on the Mercers and Steve Bannon in last Sunday’s paper.

Over the past decade the Mercer Family Foundation has funded Heartland Institute and have become one of their biggest donors (e.g. Heartland 2014 total revenue = $6.9M Mercer foundation donation $885,000).

The Heartland Institute took a big financial hit for unknown reasons between 2014 and 2015, with revenue dropping almost $2 million dollars.  We now know that a big chunk of the revenue drop was the Mercers cutting their donation from the ~$900,000 they had been giving Heartland annually from 2012-2014 down to $100,000 in 2015.  Who knows what they gave Heartland in 2016 or 2017. The Mercers dropped a lot of cash on the Trump election but is Heartland back on the Mercers A-list?

UPDATE: DeSmogBlog dove deep into the Mercer family’s climate denial funding about a month ago documenting $22 Million the family has funneled to climate denial organizations from 2008-2014.  They are trying to out-Koch the Kochs in targeted climate denial spending in recent years.

We can update those numbers here with a new Mercer 990 from 2015, recently acquired.

…so add another $4 Million plus to Desmog’s $22 Million tally of Mercer climate denial funding.

The  Washington Post’s graphic below (without above 2015 data) nicely puts the scale of Mercer funding to Heartland Institute in perspective: 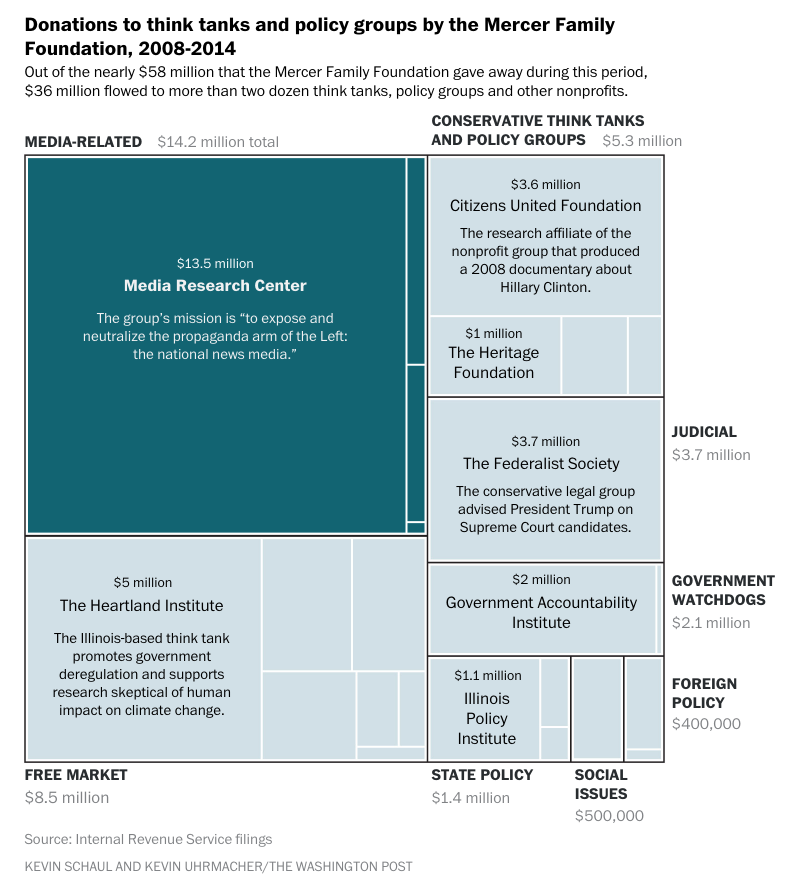 The Mercer Family Foundation is also a heavy donor of three more of the Heartland Institute climate conference co-sponsors: the Media Research Center and the Heritage Foundation and Cato Institute.  MRC is the leading recipient of Mercer foundation non-profit giving, by far now totaling $16.5M from 2008-2015.  As DeSmog points out, MRC is where lead climate denier Marc Morano cut his teeth and they are now helping Morano with his film projects.  Rebekah Mercer also sits on their Board, as she would as a major shareholder.

But there is more…

UPDATE:  Heartland clearly is not only a grantee of the Mercers, but it seems a pretty important one.  In 2007, the Mercer foundation gave out small grants to just 5 grantees in and around NYC.

In 2008, suddenly they start funding think tanks, writing much larger checks, with Heartland at the top of the list on the Mercer tax forms at $1 million dollars, followed by Media Research Center (which also happens to be a prominent sponsor of the current Heartland Institute climate denial meeting).

Heartland remains the very top of the list on every one of the Mercer tax forms to this day, 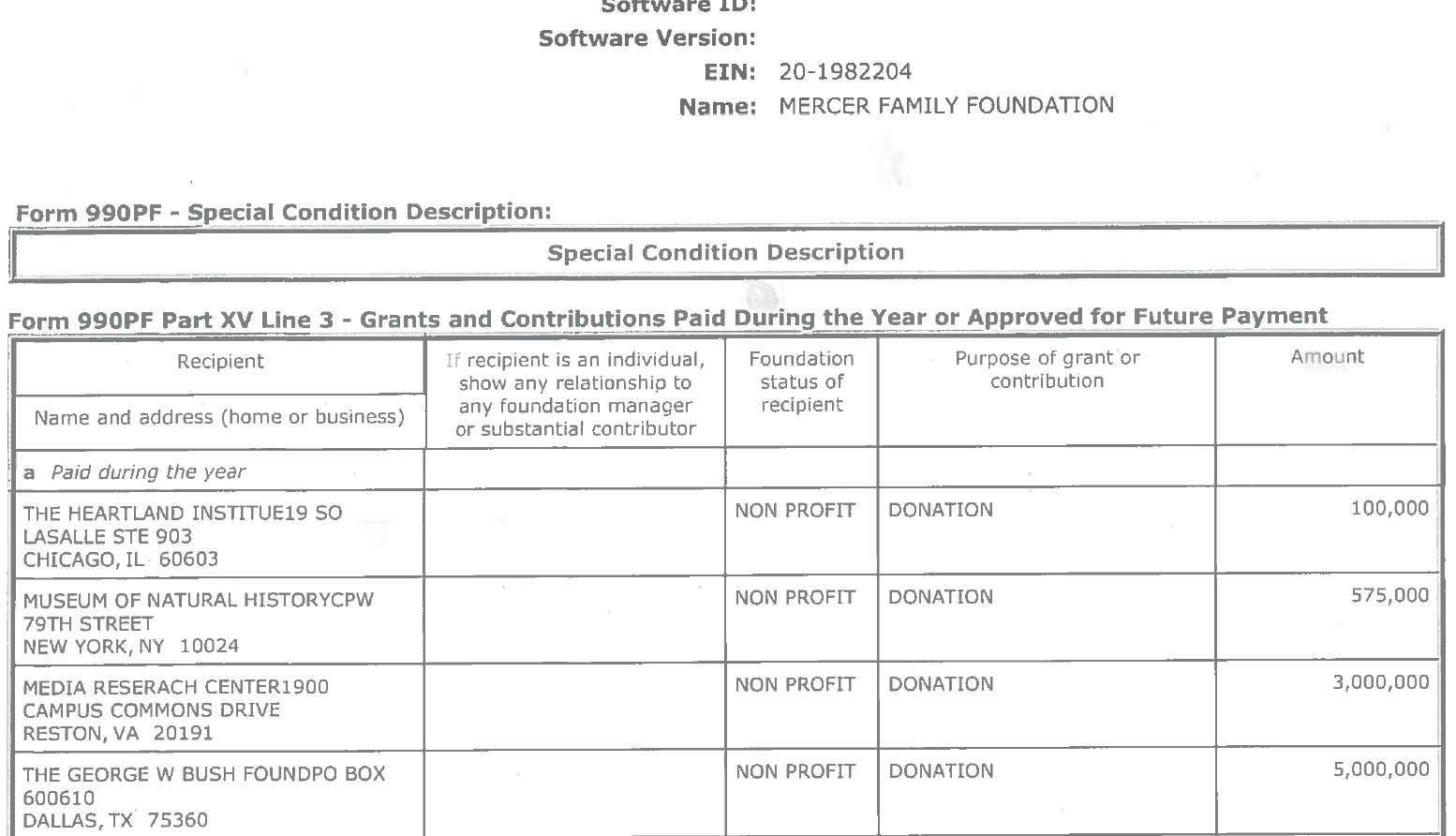 I now think it’s a fair hypothesis that the Mercers were a big part of funding the very first Heartland Denial-Palooza which took place in NYC, at a hotel on Times Square (for reasons we couldn’t understand at the time, except the attempt to garner attention which Heartland craves). Perhaps they brought the show to the Mercers home town, literally on Broadway.

In 2012, when the Heartland Institute was exposed by a sting operation, and their full finances, climate strategy and funding scheme was revealed, the Mercer grants, which had been significant from 2008-2011 ( over $2M) were not mentioned by name.

We know the Mercers like to remain anonymous if possible.  Their massive grants to the George W Bush Foundation are not revealed on the Bush side.  Heartland wrote of an “anonymous donor”, later deduced by experts to be Chicago millionaire Barre Seid, who then funneled money to Heartland through Donors Trust.

In 2012, the Mercer grant to Heartland more than doubled.

Mercer Family Foundation funds the Berkeley Earth project, a controversial data crunch project started by Richard Muller.  They are the project’s largest donor, listed on the Berkeley Earth web page as “Anonymous Foundation #1”  and gave another $250,000 in 2015 we now know.  Berkeley Earth confirmed the global temperature data showing a warming trend, much to the chagrin of the Koch funders and denier cheerleaders who hoped in 2010 for the opposite conclusion.

Below, to help you research the humans and organizations involved, is an ExxonSecrets map of some of the listed speakers at Heartland Institute Denial-Palooza and some of their inter-connections to the meeting’s sponsors, CFACT, CEI, Media Research Center, Cato Institute, the Heritage Foundation and the Cornwall Alliance.

The groups sponsoring the Heartland meeting were all big winners in ExxonMobil’s climate denial campaign, but Heartland Institute along with CEI, (the Koch funded) Cato Institute, CFACT, George Marshall Institute (now CO2 Coalition) and virtually every other organization represented at this meeting, aside from American Enterprise Institute, was dropped by ExxonMobil from 2005-2008, when Exxon was embarrassed for being shown to be funding these extremist orgs of the anti-environmental movement. In other words, a decade ago,the Heartland Institute position on climate was too extreme for even Exxon and then CEO Rex Tillerson to stomach…

Koch foundations also fund most of these groups heavily.  That data can be found at Greenpeace, where they recently tabulated that the Koch apparatus has now exceeded $100 million in climate denial funding. 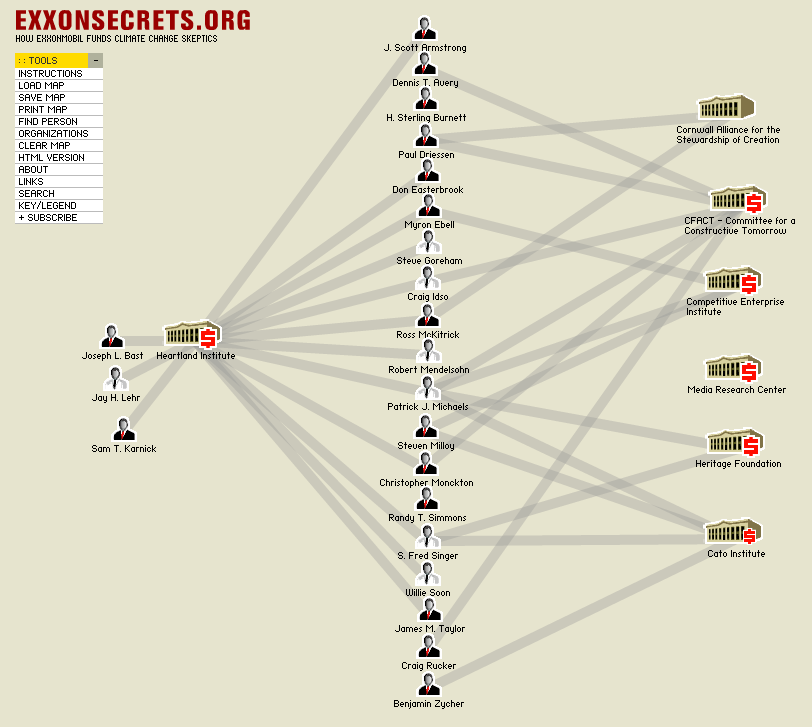