Earlier this year, I looked at just how much the largest US coal mining companies depend on access to subsidized federal coal, most of it extracted from public lands in the Powder River Basin of Montana and Wyoming. The US Interior Department tracks the amount of publicly owned coal mined by each company, but doesn’t publicly report this information. As I recently learned, even a Freedom of Information Act (FOIA) might not reveal just how much publicly owned coal companies are mining.

Data obtained from an earlier FOIA request showed that in 2014, most of the coal mined by the three biggest coal companies in the United States actually belonged to the American public. So despite regular industry cries of a “war on coal,” companies like Peabody Energy, Arch Coal, and Cloud Peak Energy also, paradoxically, owe the massive scale of their operations in large part to this major corporate welfare program. Mining companies responded by defending their dependence on federal coal, but didn’t dispute the data. 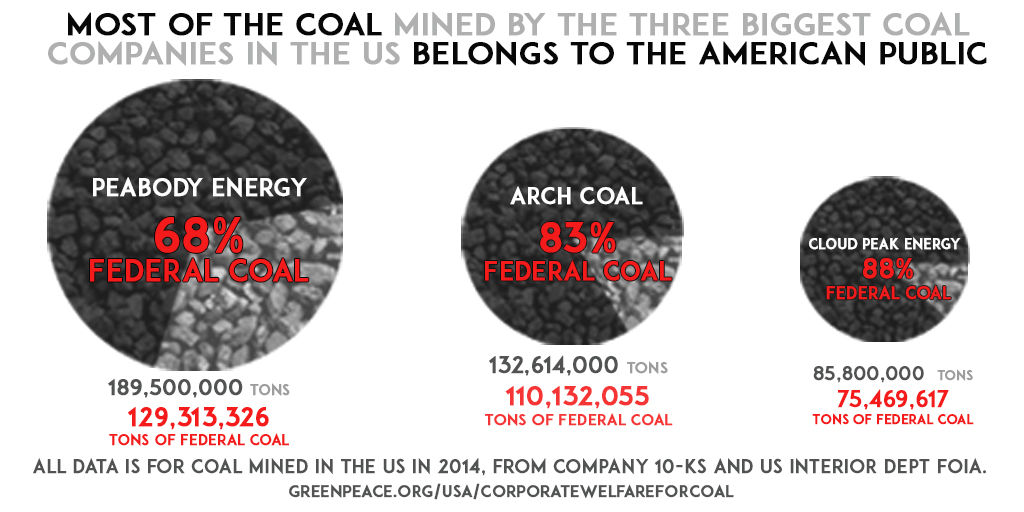 Since then, I’ve requested similar data, for 2015 and a portion of 2016. But this time, each of Cloud Peak Energy’s subsidiaries objected, apparently urging the Interior Department not to show the public how much federal coal the company mined last year. With all of its operations in the Powder River Basin, Cloud Peak Energy depends more heavily on federal coal than any other major mining company in the US, extracting over 75 million tons in 2014.

Kiewit Mining Group, a subsidiary of major construction company Kiewit Corporation, also objected. Like Cloud Peak Energy’s mines, in 2014 federal coal accounted for most of the coal that Kiewit extracted from its Buckskin mine in Wyoming, the ninth largest coal mine in the US.

Two Murray Energy subsidiaries, which operate underground coal mines in Utah, objected as well. It seems that these three companies don’t just want to keep leasing and mining federal coal at subsidized rates, they also don’t even want the public to know how much federal coal they mine.

We think the amount of publicly owned coal mined by these companies is public information, so we’re challenging the Interior Department’s recent decision to withhold this information. This coal belongs to the American public, and mining it impacts communities in a variety of ways, while burning it fuels climate change and air pollution. Some companies, like Peabody Energy and Arch Coal, use revenue generated from mining this coal to fund climate denial efforts. Other companies, like Cloud Peak Energy, pay former tobacco lobbyists to try and guide the coal industry through growing public opposition to their product by learning the “lessons from the tobacco wars.” Some of that money also goes to lobby groups and PR campaigns, while millions go to executive salaries and bonuses. Federal coal mining also provides tax revenue and jobs — these too, of course, vary by company.

The breadth of these impacts from federal coal, and the companies that mine it, is why it’s so important that the Interior Department is pursuing a comprehensive review of the federal coal program — and why the agency has repeatedly sought public input to inform that review. But that public input is hampered when the Interior Department continues old habits by deferring to mining companies and keeping secret information about the way it is managing the public’s coal. That’s not consistent with Interior Secretary Jewell’s commitment to improve transparency of the federal coal program.