Kate Sheppard at Huffington Post just posted a piece on our investigation of Peabody Coal’s new PR campaign. Here are some excerpts and additions from what we have learned so far about the Peabody campaign.

A Peabody press release announcing the campaign, called Advanced Energy for Life, argues that lack of access to energy is “the world’s number one human and environmental crisis.”

Wait a minute, I thought this was about solving poverty, it’s really about the EPA?  How sad.

Burson-Marsteller, the world’s largest PR firm, and its subsidiary, Proof Integrated Communications, are working behind the scenes on Peabody’s PR effort. Burson-Marsteller spokesman Paul Cordasco confirmed to The Huffington Post that the company is working on behalf of Peabody. Peabody spokeswoman Beth Sutton said “Burson-Marsteller and several other firms are providing support for the campaign.”

Sutton said the campaign “will be sustained long term” and “is aimed at changing the global conversation to focus on energy poverty.”

Hmm…wonder who the “several other firms” are?  It looked to us like they had put a lot of cash into the web assets anyway, so we assumed this was a big contract with lots of advertising bells and whistles to come.

Burson-Marsteller’s role isn’t readily apparent. The environmental group Climate Investigations Center linked the PR company with Peabody by determining that the website for the coal campaign initially was registered to Luis Hernandez, the managing director and chief technology officer at Proof, according to domain ownership records. The site is now registered directly to Peabody Investments Corp. 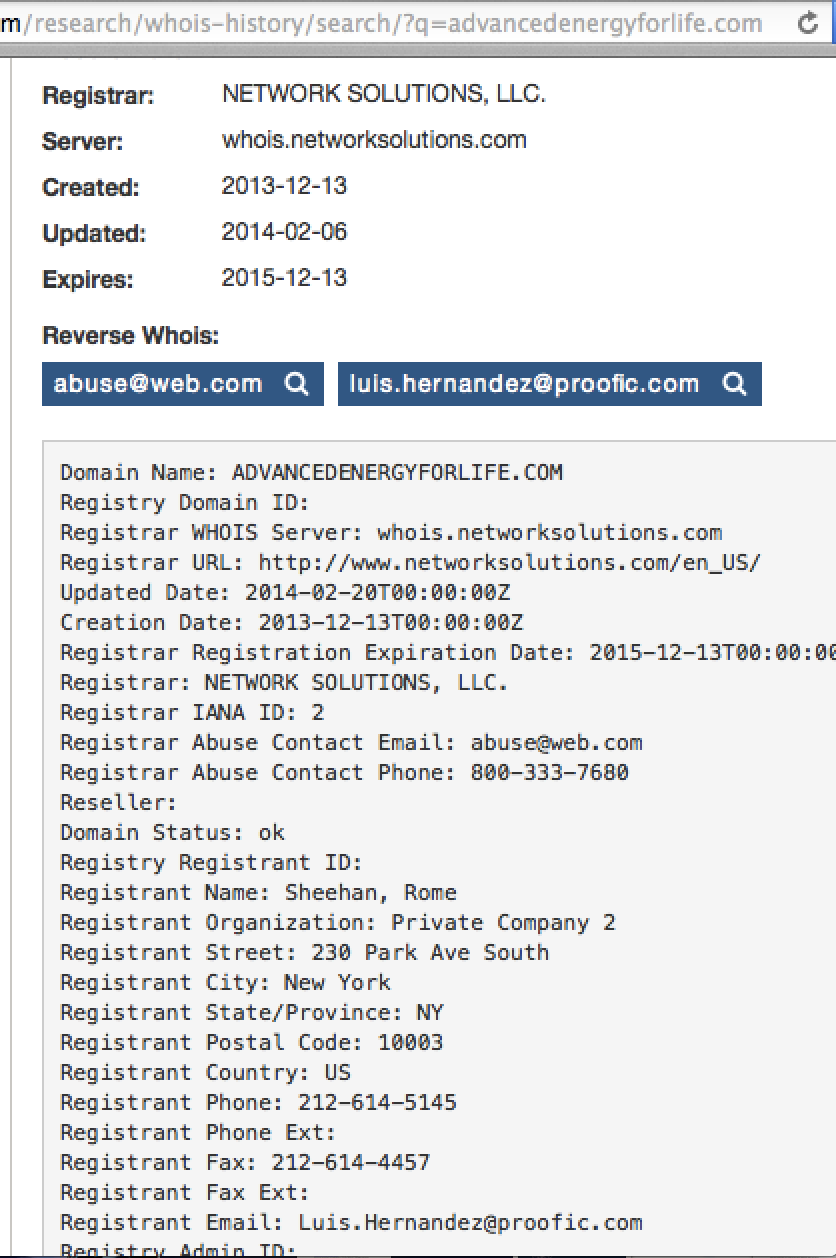 Uh, no… B-M’s role “isn’t readily apparent”, because we assume they did not want it to be.  A search of B-M’s web site for “Peabody” turns up nothing.

Proof Integrated Communications is definitely not publicizing the Peabody account on their website, but apparently their Senior Creative Director Elizabeth Penniman has done some work on the account.  Her bio on the Proof site mentions Peabody Energy as one of her accounts.  Penniman, according to LinkedIn, began her Washington career with six years in the Reagan Whitehouse as a Research Assistant on the presidential speechwriting team and a policy Analyst with the National Security Council and most recently was Vice President, Global Communications and Brand Strategy for the Elizabeth Glaser Pediatric AIDS Foundation before joining Burson Proof team less than two years ago.

Luis Hernandez, who registered the URL in December 2013 (image at right, see bottom)says on LinkedIn that he is both Chief Technology Officer at Proof Integrated Comms and a Managing Director at Burson-Marsteller.  That’s clever.

We imagine there are quite a few people at Burson and Proof involved, especially if this is going to be a sustained campaign, but they aren’t likely adding this account to their resumes or LinkedIn pages.

Burson-Marsteller has worked for a lot of clients who have serious PR problems as Kate Sheppard details – Philip-Morris tobacco , Union Carbide after the Bhopal disaster, Blackwater after the Iraqi killings, Sourcewatch has all the details.

Burson-Marsteller’s work on tobacco is what its critics point to most often. The University of California-San Francisco’s Legacy Tobacco Documents Library includes a memo from a former Burson-Marsteller staffer to a Phillip Morris executive discussing the need to “discredit” the EPA’s identification of secondhand smoke as a carcinogen and to “hold the line against an escalation of smoking bans.”

In the 1990s, Burson-Marsteller was involved in forming a “smoker’s rights” front group known as the National Smokers Alliance, funded by the tobacco industry, according to the tobacco documents. The company was also part of the creation of the Advancement of Sound Science Coalition in 1993, which also sought to undermine the science on the health risks of cigarette smoke, also on behalf of Phillip Morris. (Burson-Marsteller said it stopped working for tobacco clients in 2010.)

This part is interesting and worth a deeper look.  The Advancement of Sound Science Coalition was built and designed to defend tobacco, but then strategically adopted other issues including pesticides and climate change to make it look like a group with diverse interests.  Steve Milloy, the person who ran TASSC, became a key climate denier and now works for Murray Coal when he is not attacking the EPA for the newly reminted Energy and Environment Legal Institute.

“Burson-Marstellar has spent decades working for some of the world’s worst perpetrators of human rights and environmental abuses,” said Kert Davies, director of the Climate Investigations Center. “So Burson-Marsteller are well suited to help Peabody push dirty coal to the world’s poorest people, at a time when everyone from the World Bank to the U.N. are warning us climate change will hit the poor first, and hardest.”

Peabody’s new website describes the “Path to Green Coal” and features a graph showing the adoption of carbon-capture and storage technology for coal-fired power plants in the 2020s. The new EPA rules that the site argues against would require all new power plants to have carbon-capture and storage. Coal supporters who used to be bullish on “clean coal” have gotten much less so since the EPA announced the rules last year.

Sheppard points out this important and stark irony. Peabody is all about saving the world with mythological clean coal (or even “Green Coal”).  Meanwhile they are now complaining bitterly about the Obama Administration’s use of “Social Cost of Carbon” calculations and now that Obama’s job killing tyrannical EPA is requiring ‘clean coal’ tech on American power plants, they say it isn’t ready for prime time…oh the joy of having it whatever way is convenient at any moment.  I guess that’s good PR.

Sutton said Peabody is the sole sponsor of the campaign, but, “We expect others to join as the campaign gains greater visibility.”

We wonder who the other sponsors will be…Southern Company, Peabody’s pal at ACCCE, the American Council for Clean Coal Electricity, would be my first guess. There are Southern Co. people featured in videos on the Advanced Energy for Life website. Maybe Murray will join the Peabody Energy for Life campaign?

And the HuffPo piece ends with this funny kicker (you have to see the image on the blog):

Ads for Peabody’s campaign have been popping up in some unexpected places, such as the celebrity gossip website TMZ.com. Sponsored content touting “21st Century Coal Technologies” recently appeared between items on Kim Kardashian’s sex life and “30 Fairly Shocking Pictures of Celebrities Without Makeup.”

There must be some key demographic targets at TMZ Burson is after here…swing non-voters who are obsessed with celebrities making fools of themselves.

More as we get it.