1.  YOUR PERSONAL UNDERSTANDING OF CLIMATE SCIENCE?

Q: What is your plan to further inform yourself on climate change?

Q: What sources of information will you be seeking and what questions about the science of climate change are you seeking to answer first?
Note: Nelson answered to National Journal “I don’t know the science on that” when asked specifically whether human emissions are the primary driver of climate change.

Q: Will you be seeking advise and counsel from ALEC’s Board of Directors, Private Enterprise Advisory Council, Board of Scholars or Private Sector Members to clarify ALEC’s position on climate change in the wake of Google and other recent corporate departures?

Notes: ALEC spokesman Bill Meierling was recently quoted saying ALEC doesn’t have a position on climate science anymore than a policy “jelly beans”, a strange analogy for a crucial issue of our times.

Lisa Nelson said on Diane Rehm: “To be clear: ALEC has no policy on climate change, and does not take positions without underlying model policy. ”

However, the ALEC website is more direct, yet equivocal, on the scientific evidence for pollution-induced climate change.  We would clearly categorize this stance as climate denial:

“Global Climate Change is Inevitable. Climate change is a historical phenomenon and the debate will continue on the significance of natural and anthropogenic contributions.”

There are many events (luncheons, workshops, etc.) held during ALEC conferences.

Q: How much control do sponsors have over session topics and speaker selection?  Have the Heartland Institute or CFACT indeed paid ALEC to hold sessions about climate change during your meetings?  Or did ALEC request that they hold these briefings?

ALEC stated in its September 24th Letter to Google that it “just hosted a roundtable conversation for a variety of companies—including Google—on this very issue.”

Q: Will you provide evidence of this “roundtable” and what companies were present?

Note: There was a Presentation by Michael Terrell of Google on the IT sector’s renewable energy goals within the meeting Energy Subcommittee (of the Energy, Environment and Agriculture Task Force) on July 30, 2014 at the ALEC annual meeting.  This Google presentation was specifically titled “How Technology Companies Use Energy to Power Data Centers” and covered Google’s (and other IT companies’) renewable energy goals and business plans, not the subject of climate change.

Here is a snapshot of the Energy Subcommittee Agenda: 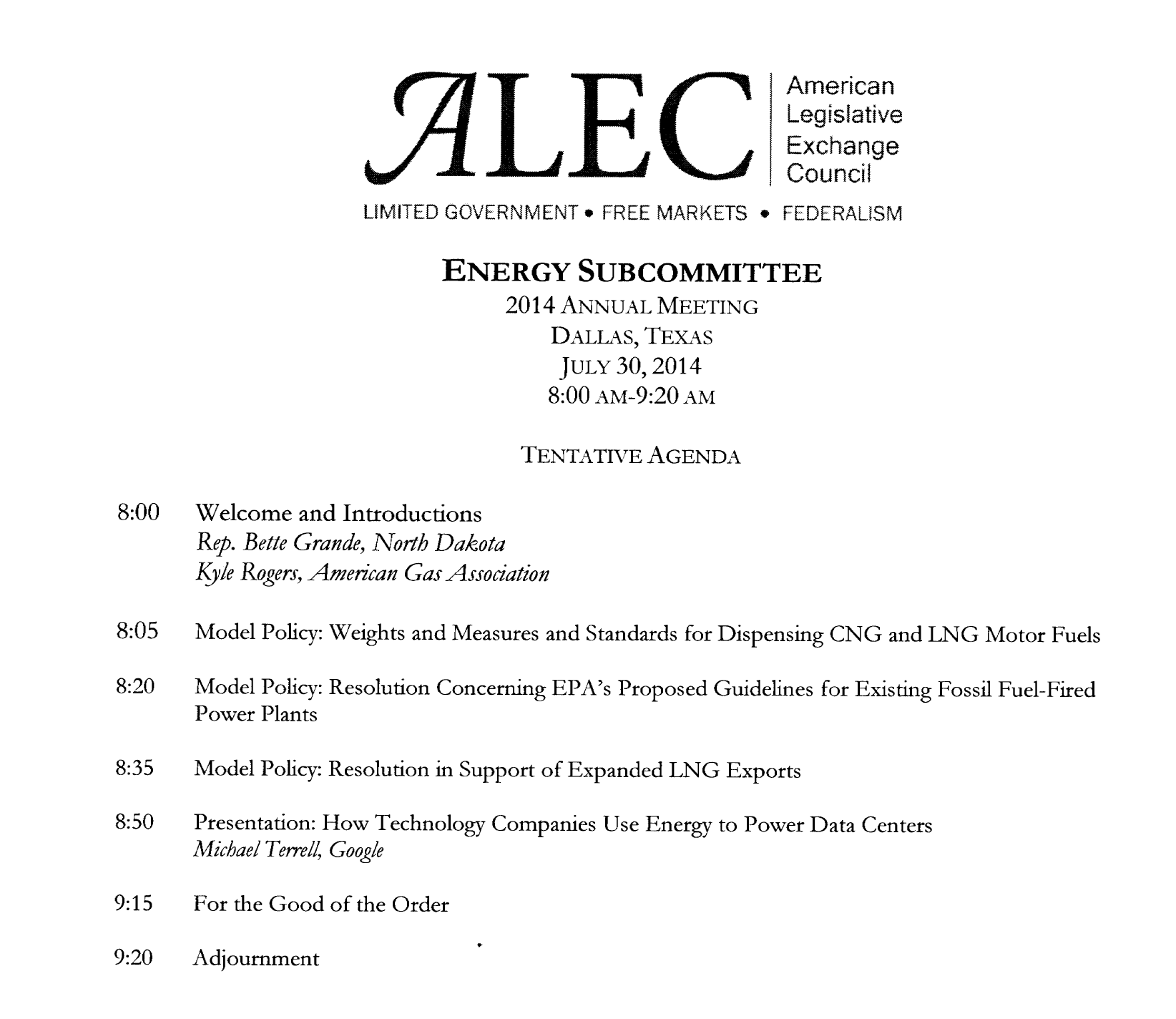 5. ALEC OPPOSITION TO SUBSIDIES FOR FOSSIL FUELS AND NUCLEAR ENERGY?