Are climate deniers in retreat? We think not. But Heartland and ALEC seem to be speaking from both sides of their mouths the days.  Flip flopping for sure.

This week has seen a bizarre collection of some climate deniers denying their own denial, while others are denying they’re no longer deniers.  It’s getting weird inside the Denial Machine.  Corporations, politicians and this week non-profit organizations are suddenly trying to either run from climate denial, deny their own history of denial or double down on denial.

It all started with the recent revelations that ALEC (the American Legislative Exchange Council) had sent “cease and desist” legal letters to a random selection of organizations (Common Cause, League of Conservation Voters and CREDO), calling on them to stop saying ALEC denied the science of climate change.   The Washington Post broke the story Monday.

That was strange enough.  Why would ALEC bring attention to its obvious climate denial?   Perhaps it had something to do with the fact that Google had already left ALEC, citing its climate denial as a central reason.

At this point it really started to get weird.  In an opinion piece in the Washington Post, Dana Milbank announced his theory with the headline “Climate Change Deniers are in Retreat.”  Fair point and supposition, given ALEC’s flurry of legal letters.

He also pointed to a little-read blog by Heartland Institute blogger and editor, Justin Haskins, late last year on a conservative 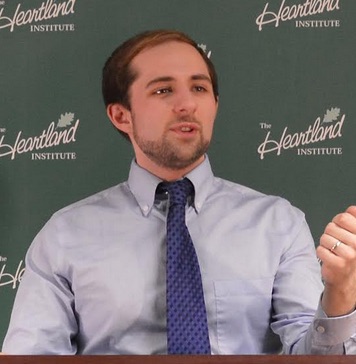 website.   Haskins made what some would call a substantially “off message” (for Heartland) series of statements about climate change (bold emphasis added):

“The real debate is not whether man is, in some way, contributing to climate change; it’s true that the science is settled on that point in favor of the alarmists.”

Haskins, who was only hired by Heartland last year, also put forward the usual argument that nobody knows the extent of how much climate change is human-caused and argued that warming would take a very long time.  But he’s clearly been doing some personal thinking about this issue, heading way out on the limb he was already balancing precariously on:

“However, if climate change is occurring, even if it’s occurring at a very slow rate, the world must take the potential dangers related to this problem very seriously—more seriously than many of the global warming skeptics are currently willing to agree to.

And this statement that might as well be from Greenpeace:

“It’s a rather extreme position to say that we ought to allow dangerous pollutants to destroy the only planet we know of that can completely sustain human life.”

It was on these words that the Washington Post’s Dana Milbank quite reasonably based his pretext about deniers being in retreat.

And these are also some of the core arguments Heartland has been fighting against for at least a decade, the organization’s main message.  Heartland would never say “the alarmists” (our side) has won even a point.  Maybe they do internally however and that’s where young Justin picked it up.

So.  Has the Heartland Institute changed its tune?

It seems that Haskins is somewhat of an outlier within his organization.  Joe Bast, Heartland’s director shot back at Milbank quiet venomously on the Heartland website, arguing somehow that Haskins’ view was very outdated, being from a whole four months ago.  Bast hastened to tell everyone that no indeed, the Heartland Institute hadn’t changed its view:

“The man-made global warming paradigm is crumbling, public support is vanishing, and except for a few last hold-outs at the Washington Post and New York Times, the whole world knows it. Human activity is not causing a climate crisis.”

Bast noted “I would have phrased it a bit differently, but I don’t disagree with the points Haskins made.

Which points exactly, Joe?  We’re confused. The ones that say the “alarmists” have won the debate about climate change being human-caused, or the one where Haskins calls carbon dioxide a “dangerous pollutant”?

Just in case we hadn’t heard him, Bast enlisted his mate James Delingpole at Breitbart (which appears to be the new Heartland mouthpiece, having run a series of frothing-at-the-mouth defences of Willie Soon), who also lambasted the Washington Post for getting it wrong.

Back to ALEC, where Bast, an invited speaker, told their 2014 summer annual meeting among other things:

“there is no scientific consensus on the human role in climate change.”

The benefits of man-made global warming exceed the likely costs.

Global warming is not a crisis.  The threat was exaggerated.

There is no need to reduce carbon dioxide emissions and no point in attempting to do so.”

We look forward to this year’s ALEC annual meeting where perhaps they might like to hear from some of the 97% of scientists who agree that humans are causing climate change – instead of their usual rollcall of Bast and his cronies.

Meanwhile it’s going to be difficult to see Heartland’s Haskins being allowed out of his blogger box on climate change for some time, if he keeps his job at all.