The National Black Chamber of Commerce has been among more meddlesome corporate climate change solutions blockers for the past two decades.  They are under increasing pressure these days.

The organization is small, basically Harry Alford and his spouse Kay Debow run it, but they have fought above-their-weight in the climate change battles over the past two decades. This is because NBCC is a great curve ball for corporate interests, purporting to represent the interests of African American people and businesses, they have served as a front group for invisible fossil fuel interests who know that putting the NBCC out on the front lines gives the appearance of a diverse movement against climate laws and policies.

There have been multiple vigorous critics of the NBCC through the years.  Most recently:

Media Matters did a great roundup on NBCC’s efforts and counterpoints.

Inside Climate News recently covered the NBCC attacks on the Obama Clean Power Plan as part of a larger effort to confuse minorities about the policy.

But then in a breakthrough investigation two weeks ago, the Florida Center for Investigative Reporting revealed several new corporate funders of the National Black Chamber of Commerce via their annual meeting held just north of Miami in August 5-7, 2015.

Here posted for the first time, is the page from the program from the NBCC annual meeting listing all the corporate sponsors, courtesy of Frank Alvarado, Florida Center for Investigative Reporting.

The National Black Chamber of Commerce for more than a decade has been spreading propaganda and talking points of the white U.S. Chamber of Commerce. Most black folks know Harry Alford does not represent them or the black business community at large. One need only peruse his organization’s thin membership and major contributor list to understand what’s really going on. This is not rocket science. African Americans were essential in the founding of the U.S. environmental and climate justice movement because our communities are disproportionately and adversely impacted. Anyone who says black folks don’t care or are not involved in environmental, energy or climate issues don’t really know what the hell is going on and is severely misinformed. We have the facts. The facts show we are not standing idle on the sidelines while national climate action plans are formulated and move forward. Some of our most prestigious organizations and institutions, including our churches and faith based groups, our civil rights organizations such as the NAACP and a large consortium of our historically black colleges and universities (HBCUs) have taken ownership of climate justice and energy justice as their issue. They are not likely to one of two individuals from the National Black Chamber of Commerce derail their quest.
Aug 16, 2015 1:12pm

Climate Progress picked up the story this week, noting that NBCC’s climate policy interventions have gone on for many years.

Through the ExxonSecrets database and ExxonMobil Foundation documents, we have followed Exxon and ExxonMobil funding of NBCC every year since at least the late 1990s through 2014, with a grand total of $950,000 in grants through those years.  We never knew about Chevron, Southern Company or Koch Industries funding until now.

While we don’t have dollar amounts for these corporate sponsors, there are several key things revealed here:

1. Koch corporate funding, along with Georgia Pacific, a Koch Industries owned company…therefore two channels of Koch corporate funding.  Koch says this funding is part of their efforts on reforming incarceration rules and indeed the panel at the NBCC conference about incarceration which was titled: “Family Secrets (lil bro caught a case) – OverCriminalization” was moderated by someone from Koch Industries. But why this policy advocacy work is being funded by Koch the corporation rather than the Koch brothers various charitable foundations is unknown. Maybe more of their advocacy funding is going inside the company to keep these contracts hidden from view?

2. Chevron funding. This has never been revealed. Chevron has charitable foundations, but does not report such funding, unlike Exxon. Chevron corporate funding may be another pot of cash flowing to groups like NBCC.

3. Southern Company/Gulf Power funding.  Again, this has never been previously revealed.  We don’t know how long Southern Company has been involved with the NBCC or what exactly they are getting for their money. Could it be the Florida Solar ballot fight? (see #4 below) Interestingly, Chevron, Southern Company and Exxon were the three corporations present on the infamous 1998 Global Climate Science Communications Team

4. Consumers for Smart Solar is a front group set up to fight a good ballot initiative in Florida that would allow solar power producers more freedom in Florida’s electricity marketplace, for instance allowing people to put solar panels on their rooftops.  What’s up Sunshine State?  why do you suck on solar power?  partly because of utility domination.  NBCC is a supporter of Consumers for Smart Solar and CSS is a supporter of NBCC, hand in hand.  So quaint…makes you want to sing Ring around the Rosey. A pocket full of posies. Ashes, Ashes. We all fall down.

There are a numerous other sponsors/funders that are interesting and have heretofore not been revealed connected to NBCC: 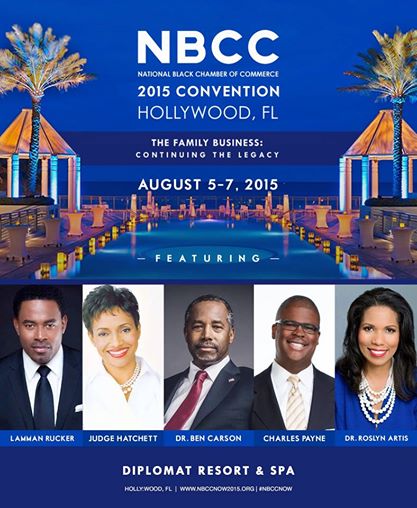 What do these funders get from NBCC?

They get a voice opposing the EPA and climate progress at every turn.  Alford and NBCC have opposed every viable climate policy advance from UN Kyoto Protocol to Senator McCain’s attempts in the early 2000s before he forgot how to be a climate champion, to Henry Waxman’s valiant 2009 effort to the 2015 Clean Power Plan.

Along the way, Chevron and Exxon for instance get Harry Alford and NBCC to oppose the new EPA ozone air pollution standards, an issue that the oil industry has been hammering lately.  Alford testified before Congress on this recently and there was a session at the NBCC annual meeting entirely dedicated to the EPA Ozone standards.

How do the Proposed EPA Ozone Regulations Effect My Business?

Notes: An oversight or omission, The American Fuel and Petroleum Marketers Association (AFPM) nor Steve Higley were listed speakers or sponsors of the meeting.

Bill Kovacs of the US Chamber of Commerce appears to be a frequent wingman to Harry Alford, often appearing to testify alongside or cohosting events.

Norris McDonald of the African American Environmentalist Association posted this blog describing the NBCC event and the panel on ozone standards with a slightly critical bent.  However, the AAEA now seems to be promoting upcoming state level town hall meetings NBCC is holding attacking the EPA Ozone Standards.

Here is a short account of NBCC testimony, reports and documents we have tracked through the years.

August 1997 – NBCC Resolution on Climate Change opposing US participation in the Kyoto Protocol.

1998 – Refusing to Repeat Past Mistakes: How the Kyoto Climate Change Protocol would disproportionately threaten the economic well-being of Blacks and Hispanics in the United States.  Study done by Management Information Services, Inc. (MISI). This report was widely distributed in Washington DC at the time. 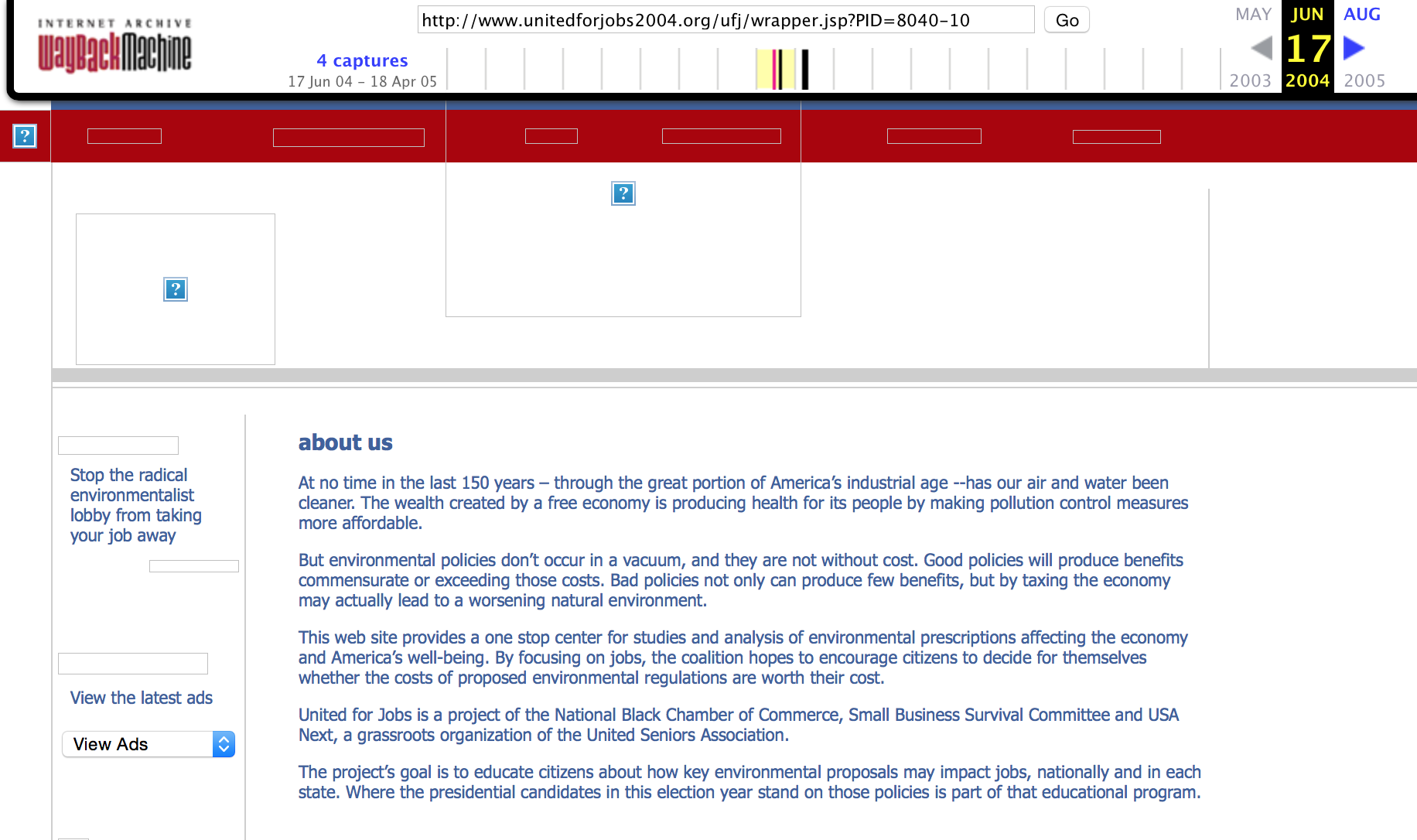 2004-2008 –  United for Jobs, NBCC was the figurehead organization of a campaign likely paid for by oil companies, and constructed by the PR Comms company, DCI Group, who around the same time build climate denial hub Tech Central Station with money from ExxonMobil and others.  United for Jobs was built intentionally to attack the 2004 McCain-Lieberman climate bill, one of the first serious and viable pieces of climate change legislation.  United for Jobs slogan was “Stop the radical environmentalist lobby from taking your job away”.

Links on WebArchive for United for Jobs in 2004 targeting McCain bill and in 2005-6, they went more generalized “pro-oil” messaging with the campaign.  The site remained live until 2008

May 2009 – Report commissioned by NBCC in May 2009, done by Charles River Associates decrying the Waxman Markey climate bill that eventually was approved by the House Impact on the Economy of the American Clean Energy and Security Act of 2009 (H.R.2454)

June 2015 – In a stunning if random move, Alford penned an op-ed in the Pittsburg Courier, titled “Beyond the Rhetoric…Fossil fuels and African Americans”, proudly embracing his fossil fuel funders and praising fossil fuels for lifting blacks out of poverty…if only that were true.

The legacy of Blacks in this nation has been tied to the miraculous history of fossil fuel and the economic growth in communities because of the successful harvest of fossil fuels. Consistent with the emergence of the Industrial Revolution and the availability of the Homestead Act for freed slaves, fossil fuels have been our economic friend.

To be continued.  Please get in touch if you have information about the National Black Chamber of Commerce.